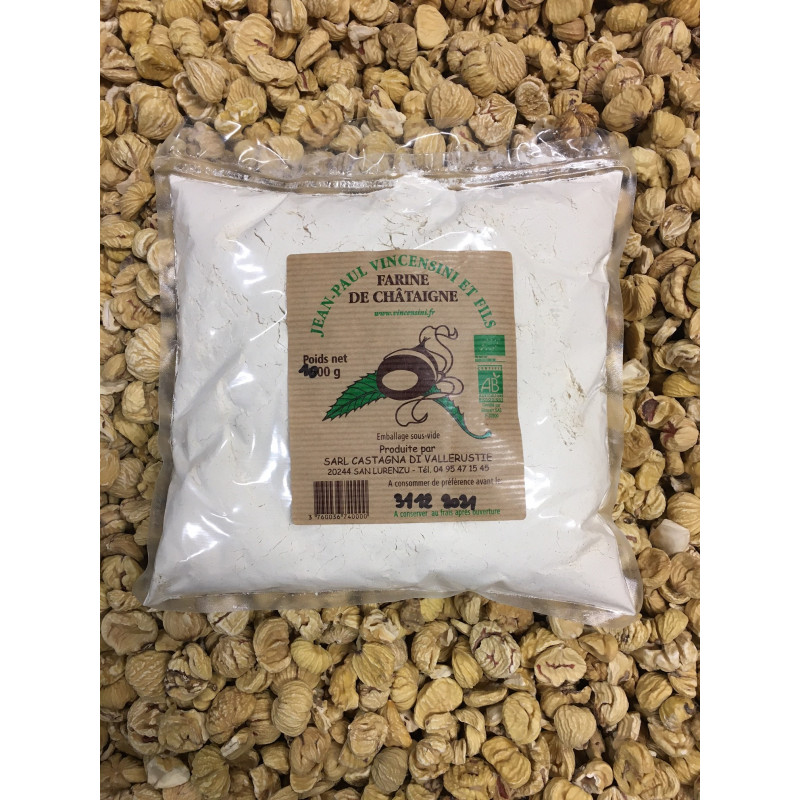 The chestnut tree "u castagnu" has formed this region and gave it its name; la Castagniccia. It has been inseparable from the life of the inland Corsican villages for at least five centuries. The chestnut tree was the welfare bringer and the region was said to hold a chestnut civilisation.

Nowadays, the chestnut growing is an essential element for maintaining the cultural heritage, the mountain economy and its environment.

The chestnuts are harvested starting from mid October, they are progressively dried on a wood fire, shelled and strictly sorted before being put in the wood stove to be transformed into  biscuits or flour, for which our ancestral mills will ensure the delicacy and unique savour.

Quality standard: selected fruits, obtained after drying the chestnuts with pulsed air or in a wood stove (following request), manual sorting, grinding on the millstone, revealing  the organoleptic qualities of the fruit

Savours: brings a nice chestnut flavour to all preparations

Tips: mixed with other flours, wheat flour for instance, chestnut flavour should represent between 15% and 50% of the pastry preparation, depending on what you prefer. This way, the preparation can be used to make pancakes, cakes, custard, bread… or as an ingredient for any culinary preparation (sauce base….).

Store in a dry and cold place (refrigerator).

Recipes can be found on the packet.

Particularity: product WITHOUT GLUTEN. This flour can replace wheat flour in pastries up to 50%.

It has been almost forty years now since Jean Paul Vincensini started « la CASTAGNICCIA », his traditional chestnut business in the heart of the historical Corsican chestnut grove.

As the best varieties, (campanese,teghje,ghjentile) especially selected by the elders during the previous centuries for their  aptitude of being transformed into chestnut flour (level of sugar of the fruit, non penetrating tan, easy dry shelling, yield….), can be found in this region, several chestnut trees have been renovated (pruning, clearing of brushwood, fencing plots of land) in the towns of  Aïti , Salicetu , Rusiu, Cambia, and Silvarecciu,Mazzola .

Chestnuts harvested between October 15 and November 10 are being dried.

The fresh fruit contains 60% of water and this percentage should be brought back to 7% to be able to make flour out of it (once the chestnuts are dried, they are « threshed », which means that their two skins are taken off, before they are hand sorted in the sieve (cernigliu), put into the stove to be turned into light biscuits and grinded on the millstone in our ancient mills to offer you a savoury and nice flour.

Since 2007, our flour holds the guarantee of origin called « FARINA CASTAGNINA CORSA-FARINE DE CHATAIGNE CORSE » , on top of its BIO label